Wherever Intruder (Channel 5) is set, I want to live there. It’s clearly on the wild Irish coast — you can tell from the houses, the seascape and the rugged hills.

It boasts a picturesque Celtic fishing harbour, and boozy wine bars with great seafood. There’s even a place that advertises itself as an ‘English pub’.

Equally apparent is that it’s within easy driving distance of London, which makes it an estate agent’s paradise. We glimpse thatched cottages . . . and also palm trees.

This geographically confused place is called Becksfield and it’s quite the most believable aspect of this drama. Everything else is rather more improbable.

She’s married to ‘shock jock’ radio host Sam (Tom Meeten), who likes to throw dinner parties for his old university friends, where the main course is a coffee table heaped with cocaine. 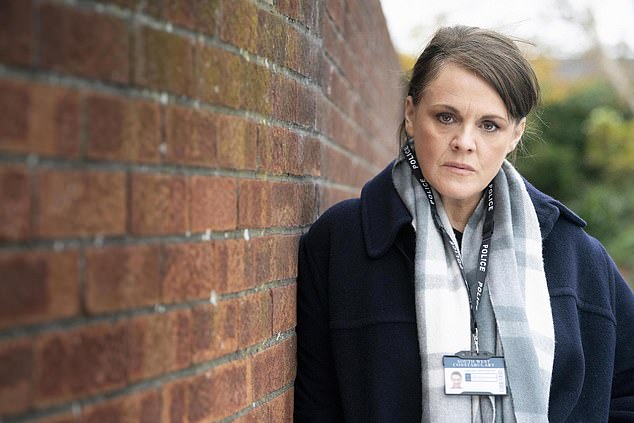 One drug-fuelled night, Sam confronts a teenage burglar who is trying to climb through the kitchen window — and stabs him to death on the draining board.

Naturally, Elaine offers to tell the police she did it. Her best friend Angela (Helen Behan) happens to be staying the night and agrees to lie, too.

Trouble is, Angela is a mad drunk who thinks she can blackmail Sam into dumping Rebecca and marrying her instead.

Rebecca doesn’t much like the situation, but she can’t protest because Angela is her boss at work, as well as her dearest chum.

Luckily for Sam, even though he’s a well-known media figure, the press are no more interested than the police in the dead teenager in his kitchen. All agree it’s self-defence: case closed, nothing to discuss.

You might expect a talk radio DJ to share with his audience how his wife saved his life by impaling a hoodlum on a breadknife, but Sam has other things on his mind.

The burglar’s accomplice stole his laptop. This means Sam has to spend hours staking out a house on the rough side of Becksfield.

Ah, the estate agents didn’t tell us paradise has a grotty suburb, did they?

What Sam doesn’t know is that Police Family Liaison Officer Karen Bailey (Sally Lindsay) has suspicions. She thinks there’s something fishy about it all.

PFLO Bailey isn’t wrong. Intruder is fishier than a pickled herring in anchovy sauce, served in a crab shell with chopped kipper. 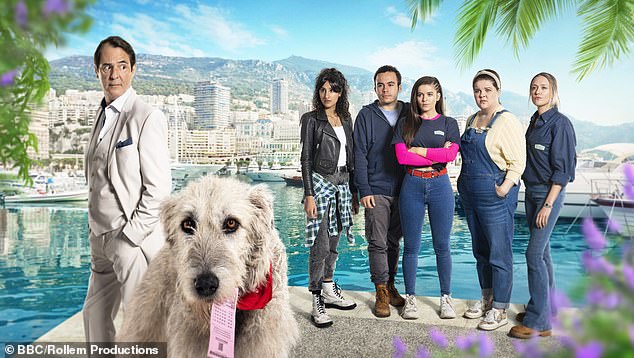 The cast of series four of The Syndicate (BBC1), written and directed by Kay Mellor

It’s all so bizarre that even the writer and director, Gareth Tunley, doesn’t seem certain of what he’s serving us.

One minute it’s a blood-soaked satire on coke-snorting, middle-class show-offs, then it’s a police procedural, then it’s a sitcom.

As Sam pursued Angela round her cottage and across the cliffs, angrily repeating her name more than 30 times, he looked like Margo Leadbetter in The Good Life, trying to get the attention of her vague husband, Jerry.

‘Angela? Angela! Angela?! Annn . . . Gela!’ Was it supposed to be funny? And if so, what were we supposed to make of the sobbing father, sitting in the lonely mess of his dead son’s room?

The Syndicate (BBC1), written and directed by Kay Mellor, is more consistent. Though there’s a crime at its core (newsagent Frank, played by Neil Morrissey, has legged it with a lottery ticket worth £27 million) and every character has a traumatic backstory, we’re never meant to take it too seriously.

This is just a bit of fun, as frothy as the bubbles in Frank’s bathtub, as he luxuriates with a flute of champagne and a cigar.

The whole cast are loving it, none more than Duke the Irish wolfhound. He got to shred a pillow on a hotel bed and dine on steak tartare. Good boy!