When 12,000 photos of the California coastline were put online in 2003, Barbra Streisand sued.

She wanted one of the shots expunged from the internet, claiming it was a gross invasion of her privacy because her Malibu mansion was visible. 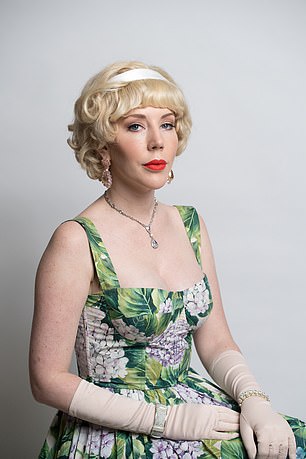 Katherine Ryan was a hoot as Joan Rivers in Urban Myths, flinging one-liners like darts

The lawsuit was doomed, of course, but what chutzpah, as they say in New York. What style. What a star.

Did she always have that confidence? Urban Myths (Sky Arts) imagined the moment when, as an aspiring actress in a flop show off Broadway in 1958, a 16-year-old Barbra first decided that the world had to give her everything her own way.

Now in its fourth season, Urban Myths might have passed you by. While it was available only to Sky subscribers, audiences have been as low as 40,000.

Since last month, however, Sky Arts has been available on Freeview (try number 11), and for fans of comedy as well as culture, the channel has a lot to offer.

Its painting contest Portrait Artist Of The Year, a sort of Bake Off with easels, launched yesterday with Stephen Mangan as host.

Urban Myths is a half-hour slot that takes tall stories from popular culture and imagines what might have really happened.

The playlets are too short to be engrossing or even always memorable, but they’re fun: Princess Di goes clubbing with Freddie Mercury, and Kenny Everett, Alice Cooper and Salvador Dali spend a wild weekend together.

Legend has it that when acid-tongued comedian Joan Rivers was a struggling stand-up, still performing under her maiden name Joan Molinsky, she marched into her agent’s office and demanded a starring role in a play. Any play.

He fixed her up in a steamy romantic drama called Driftwood. Joan refused to play the role ‘Man in Black’, insisting it was changed to ‘Woman In Black’.

But her character was still expected to grab the heroine in a passionate clinch at the end, and kiss her.

Tuneless she might be, but Scarlett Moffatt was singing her heart out on Celebrity Karaoke Club (ITV2). Next, she is to host Love Bites — a cookery contest that sends the winners on a date. I’ve just lost my appetite.

That’s the way Joan Rivers loved to tell the story, anyhow. Her co-star has been more reticent. Barbra doesn’t like to talk about it.

Katherine Ryan was a hoot as Joan, flinging one-liners like darts. ‘Madame Schnozz,’ she snapped at Streisand, ‘are you laughing under that nose? I can’t tell cos of the shadow.’ But it was Jessica Barden, who used to play Kayleigh in Coronation Street, that commanded the screen as the emerging superstar. She caught Streisand’s accent precisely, the way she turns ‘sure’ into a three-syllable word: ‘she-orr-ah’.

Sue Perkins wrote and directed the short, giving us a convincing portrait of a young woman who didn’t know yet how talented she was. ‘I’m going to be a serious actor,’ Barbra announced. ‘Singing is a floozy business. I want an Oscar.’

‘Great,’ shrugged Joan, ‘and you’ll have a Grammy too.’

Another Hollywood megastar was demanding total privacy in The Savoy (ITV), though the filmmakers dropped enough hints for us to guess that it was either Robert de Niro or Al Pacino — in town for the Bafta awards last February. Whoever was behind the door in room 618, paying £10,500 a night, they wanted blue satin bedsheets and they were prepared to pay an extra £1,900 for the privilege. Even head butler Sean thought that was a bit extravagant.

Downstairs in the restaurant, Lord Of The Rings actor Andy Serkis was quite happy to be seen by the crowds. And Baywatch star David Hasselhoff seemed to spend half the day swanning through the foyer, taking tea in the middle of the restaurant, and breezing out.

You’d almost think he wanted to be noticed.