After Cardi B shocked the music world by revealing her pregnant belly at the BET Awards, the rapper rocked a tight tiger-print dress on a dinner date with her hubby, Offset.

Don’t mind Cardi B – she’s eating for two. Hours after Cardi, 28, debuted her baby bump at the 2021 BET Awards on Sunday (June 27), she and her husband, Offset, decided to grab a bite to eat at BOA Steakhouse in Los Angeles. Following her glittery performance, where she first let the world know she and Offset, 29, are expecting, Cardichanged into a tiger-striped outfit, one that showed off some deep cleavage and her growing belly. With nails as long as tiger claws and a matching purse, the “WAP” rapper looked fierce like a jungle cat – one who is about to welcome a new cub to the family. 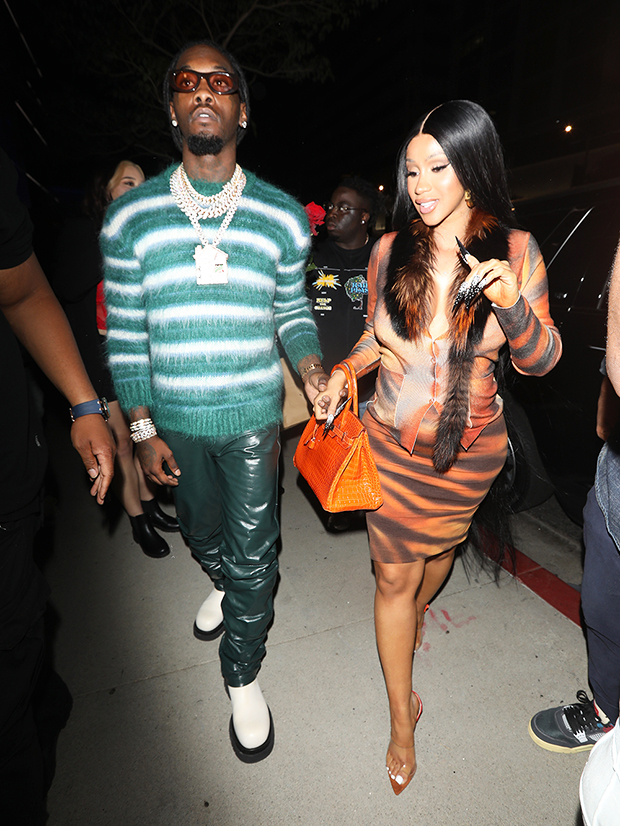 Offset, for his part, rocked a fuzzy green-and-white striped sweater – an odd choice for Los Angeles in June, but maybe the Microsoft Theater, where the BETs were held this year, was too cold for him. He also sported leather pants and a silver chain with a jeweled house. It was a massive piece of bling that, on any other night, would have stolen the spotlight. However, it was hard getting eyes off of Cardi’s belly. 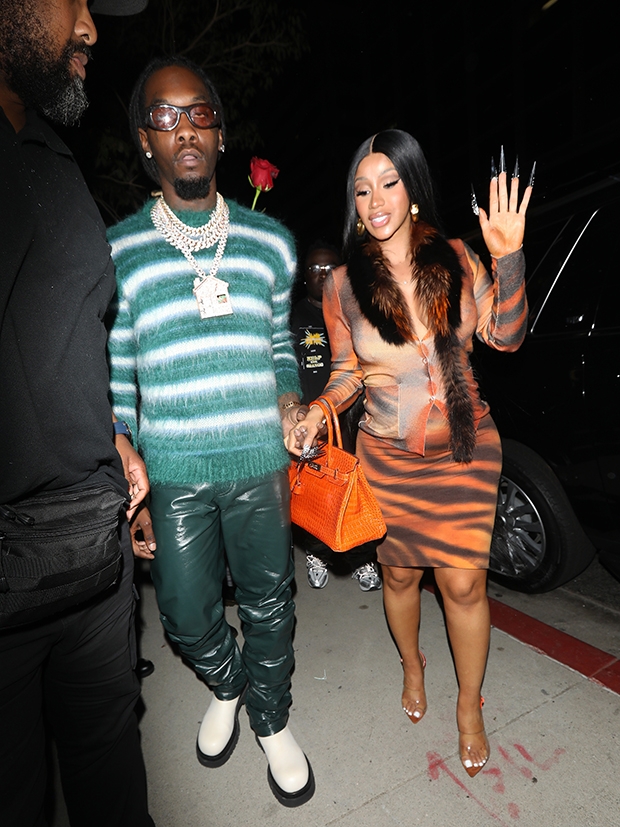 Cardi revealed her secret second pregnancy while performing with Offset and his group, Migos, during the BETs. After the group finished performing their song “Straightenin,” Cardi arrived to join for a performance of “Type Sh-t” while wearing an embroidered Dolce & Gabbana bodysuit, one that boasted a sheer panel that exposed her belly. Minutes after she took the stage, Cardi posted a photo from apparently a recent pregnancy shoot. “#2!” she captioned the announcement. Cardi and Offset are proud parents of daughter Kulture Kiari Cephus, who will turn 3 in July.

Secrets and surprises are part of Cardi and Offset’s game. The two tied the knot secretly in September 2017 (which is strange when considering Offset publicly proposed to her on stage at Power 99’s Powerhouse concert in Philadelphia a month after they got married.) The following year, Cardi was caught up in pregnancy rumors, and she ultimately confirmed them by debuting her baby bump during a performance on Saturday Night Live. It was the first time she addressed the speculation that she was pregnant, and she did so without saying a single word about it.

As of this point, it’s unclear how far along Cardi is with this second pregnancy (or if this will affect the release of her new album, the long-awaited follow-up to Invasion of Privacy.) However, Cardi is releasing something new this year, one way or another.