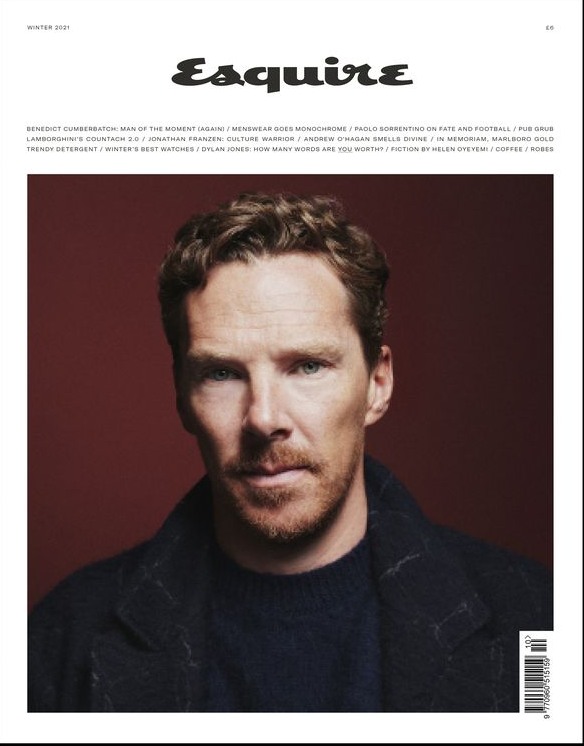 Benedict Cumberbatch covers Esquire UK to promote The Power of the Dog, and judging from the interview, he’s also promoting Spiderman: No Way Home. Bendy is in his 40s now, he’s a husband and father of three and he’s matured significantly over the past five years. We all have, the past five years have been rough personally, globally, everything. What I appreciate about Bendy is that he’s not trying to convince anyone that he’s a completely new person, that no one should mention Sherlock to him, that he’s ashamed of all of the crazy energy around him years ago. He just… moved past it. That’s still part of who he is but he’s not that guy anymore. You can read the full Esquire piece here. Some highlights:

He loves horse work: “Loved it. Wonderful just to get back in the saddle.” (“Though,” he adds, “it was a Western, so it’s a different style”.)

He really didn’t bathe for ‘Dog’: “I wanted that layer of stink on me. I wanted people in the room to know what I smelt like. It was hard, though. It wasn’t just in rehearsals. I was going out to eat and meet friends of Jane and stuff. I was a bit embarrassed by the cleaner, in the place I was living.”

He stayed in character throughout the shoot: “If someone forgot, on the first day, and called me Benedict, I wouldn’t move.”

He’s not a vegan anymore: “I was for about 18 months. I applaud people who are vegan and I enjoyed my journey with it, but it [non-vegan food] just crept back into my life.”

He likes working so much: “I really enjoy my work. When I do work, I want to work hard. It has to be worth leaving my family [his wife, the theatre director Sophie Hunter and their three boys] and home for, to do. To make them… Oh, this sounds weird but I guess to validate me not being there. And If I can get away with a new skill and call it work, lucky me, you know? That saves me a few night classes or, you know, time I don’t have.”

His childhood: “I was very inquisitive. I was very talkative. Slightly eccentric, I think. An old soul, as one of my teachers described me. I had a great amount of energy. I was an only child, so I loathed conflict.” That’s an only child thing? “Yeah, it kicks off all the time at home now. Not if you’re an only child. You’re not used to resistance. You kind of avoid it. I still don’t like conflict.”

Why he thinks people still like him: “I’m easy with promoting my failings, and that I’m just trying to do it and fail better, at whatever it is. Life principals. Advocacy work. Privacy. All of that. I don’t know. I really don’t want to say these things because it becomes about self-appraisal and it sounds like I’m blowing my own trumpet. But I try to keep a balance of certainty in who I am. And also an empathy for others, to try and be an open human being, I guess. So hopefully I keep everyone surprised and everyone, I suppose, who are that devoted… also people who are dismissive as well, there’s all sorts of voices out there, when you get to the sort of exposure I’ve had, and I’m aware of that as much as I’m aware of the devotion – I think people are loyal to me because, and maybe I say this with good intentions, but I try to improve. And like they say in the old Samuel Beckett paraphrase, fail better.”

I’m not sure if it’s actually an “only child” thing to hate conflict? I’m conflict-adverse because my parents were constantly putting me in the middle of their sh-t, but was that because I’m an only child? Eh. This is true about only children though: “You’re not used to resistance.” Yeah. We’re used to getting our way and compromising doesn’t always come easy to us! As for the nicotine poisoning… I didn’t even know that still happens in this day and age, probably because most smokers are smoking filtered cigarettes. I wonder if people who roll their own cigarettes are still getting nicotine poisoning? Gross.