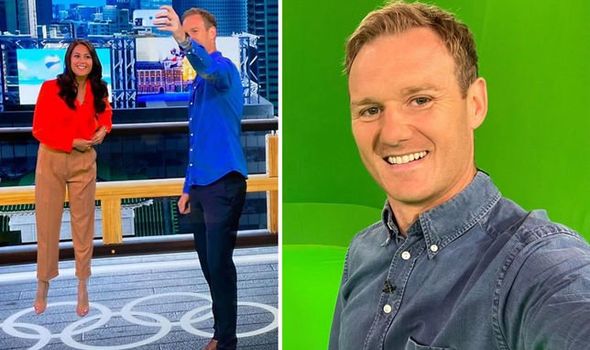 Dan Walker, 44, will be fronting the Tokyo Olympics 2020 coverage with 32-year-old presenter Samantha Quek. Taking to Twitter, he shared a picture of him and his co-star posing at a social distance from a “virtual rooftop pagoda”.

Don’t know how you can sit in that green studio for so long… awful!

The pair will host coverage with the help of a green screen which features Tokyo graphics in the background.

Addressing the bright green background in the studio, he wrote on Twitter: “We are about to go LIVE on @bbcbreakfast from our #OlympicBreakfast set which starts tomorrow from 5am until 9.

“See you on BBC1 in a mo. It all looks green but @SamanthaQuek and I are actually on a virtually rooftop pagoda with Tokyo behind us.”(sic)

Many queried if such a background made them feel nauseous.

One commented: “Dan and Samantha, does working in that green screen begin to bring on nausea or is it something you get used to?

“Maybe worse for the camera men/women who are directly looking at it?”

A second echoed: “Does all the green spam your eyes and make you feel nauseous?”

A fourth penned: “Don’t know how you can sit in that green studio for so long… awful!”

However, others were impressed by the power of the green screen.

“I saw the footage before your tweet and thought you were in Tokyo. Very realistic,” a fifth added.

Barbara Slater, director of BBC Sport, said: “There will be something for everyone on the BBC for Tokyo 2020, with a huge range of content available across TV, radio and online, plus a world-class line-up of presenters and pundits.

“The anticipation for this year’s Olympics is higher than ever, and we’re proud to be showcasing the very best of the action.”