Will Smith and Jada Pinkett Smith have faced the brunt of tons of ridiculous speculation about their relationship (see: August Alsina casually revealing that he dated Jada while she was married). But while that was all extremely !!!!, it isn’t the first time Will and Jada have dealt with the internet flipping TF out about their marriage. They’ve been shutting down rumors for literally decades—from claims they’re in an open relationship and speculation that they’re swingers to reports that Jada cheated on Will with Marc Anthony. But as usual, the truth is waaaay more complicated than a buncha online drama. Time to break down the rumors with a handy and mildly thirsty timeline—starting with how Will and Jada met and fell in love.

Will met Jada on-set of Fresh Prince of Bel-Air, but he was married to Sheree Zampino at the time. Once he and Sheree split, Will straight-up called Jada and asked if she was seeing anybody. When she said no, he replied, “Cool. You’re seeing me now.” The rest is history!

Jada and Will got married while she was pregnant with their son Jaden—although initially Jada didn’t love the idea of making their relationship “official” on paper. Here’s what she told People in a 2019 cover story:

Amid rumors that Jada was hooking up with Marc Anthony, the couple released a statement to People. BEHOLD:

Meanwhile, Jada’s rep said, “All the rumors regarding Marc Anthony and Jada are false. Completely untrue. As for [the reports of a split between] Will and Jada, I’m not commenting on their personal life.”

Otherwise known as the fated day Jada hopped on Facebook to clarify comments that had everyone thinking she and Will were in an open marriage (basically, she said Will could “do whatever he wants”):

Jada gave an interview with Howard Stern, saying, “I’m not the kind of woman that believes that a man’s not gonna be attracted to other women. It’s just not realistic. And just because your man is attracted to another woman doesn’t mean he doesn’t love you. And it doesn’t mean he’s gonna act on it.”

Amid yet another round of rumors that Will and Jada were splitting, Will hit Facebook and denied that they were getting a divorce: 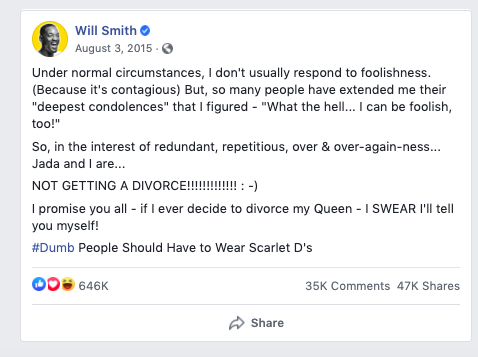 My king has spoken.

Is now a good time to mention that 2015 was also the year Jada was introduced to August Alsina? Just casually saying!

Jada and August attended the 2017 BET Awards together. 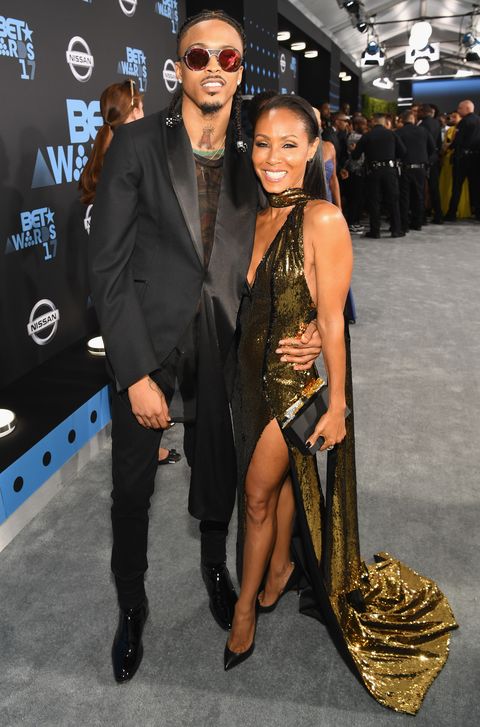 Jada showed up on Watch What Happens Live and said the wildest rumor she’s ever heard about her family is that she and Will are swingers: “That’s the craziest one. It’s constant. And I’m like, yo, I wish. I wish.”

During an interview with Angela Yee, August claimed that he and Jada dated while she was married and that her marriage was open at the time.

Oh, and August also claimed Will gave them his “blessing.”

Less than 24 hours after August’s interview dropped, Page Six got in touch with Jada’s reps who said his claims were “absolutely not true.”

Jada (sitting across from Will) opened up about the sitch with August during an episode of the always-iconic Red Table Talk, confirming that she did have a relationship with him—and that she and Will were separated at the time.

That said, Jada denied that Will ever gave permission to August, saying, “One thing I want to clean up…about you giving ‘permission,’ which is…the only person that can give permission in that circumstance is myself.”

If you’re wondering how August felt about Red Table Talk, apparently the answer is not great because he seemingly subtweeted Jada, saying, “If you have something to say, say it w/ ya CHEST, kids. It’s always very perplexing ’cause I real deal be showing people genuine love. Whole time that envy eating ya lil heart. Anyway, NEXT!!”

If you have something to say, say it w/ ya CHEST kids.
It’s always very perplexing cause I real deal be showing people genuine love. Whole time that envy eating ya lil heart.
Anyway, NEXT!!

Believe it or not, but the Smith fam is all good following the Red Table Talk drama. Well, at least that’s what Us Weekly is saying.

“The Smiths as a family are really glad they addressed this and put everything out in the open,” their source says. “Will and Jada, at the end of the day, are like a normal couple who just happen to be glorified because they’re famous. They have fought. They have reconciled. At the end of the day, they do love each other.” Cool-cool-cool.

Will and Jada also think everyone is blowing this whole thing “out of proportion,” with the source adding, “At the end of the day, what hasn’t changed is the love that Will and Jada have for each other, and the deep love that their children have for them…They are an extremely close family, famous or not.”

So, where does that leave Will and Jada? Considering that he told his wife “I could love you through anything,” it looks like there’s no drama to see here!

Jada revealed during an episode of Red Table Talk that it takes work to maintain a spark in the bedroom.

She added that she still occasionally feels “uncomfortable”expressing her desires, but maintains that it is “deeply healthy…It’s something that we don’t talk about a lot and there’s so much fantasy around it.”

Will’s eponymous memoir comes out, and the actor doesn’t hold back on the entire arc of his relationship with Jada, starting at the very beginning. The pair initially met on the set of The Fresh Prince of Bel-Air, which Jada unsuccessfully auditioned for. But it wasn’t until later that the two connected on a much deeper level and became practically inseparable.

The book reads: “My divorce from Sheree wasn’t yet final, so Jada and I decided it would be prudent if we kept our relationship under wraps. (We were both pretty famous, and we felt it just wouldn’t have been a great look. The blessed yet unintended consequence was that we spent every single moment together, just us. The first three or four months were as wild a romantic whirlwind as our bodies could have possibly handled…We fit together so naturally, and our energies combined exponentially in a way that felt like old friends more than new lovers. We had an unspoken language, and everything we focused on flourished.” *swoon*

However, after a number of years, the couple began to run into issues. In his novel, Will described it as “suffering the brutal death of our romantic fantasies, the burning away of the idealistic illusion of the perfect marriage and the perfect family. Neither of us wanted a divorce; we knew we loved each other, and some aspects of our union were magical. But the structure of the life that we had established was strangling both of us.”

Oprah interviewed the Men in Black star about his relationship with Jada and questioned him about specific excerpts in his memoir, including his use of the phrase “loving freedom.”

The actor responded: “You love in freedom with everybody except your partner.” He then explained how people tend to lend more space in friendships or relationships with their children more than they do a conventional marriage. However, said Will, “I think the difficulty that people have and difficulty in discussing it is people only think in terms of sex.”

He added: “People are trying to put something on it: ‘Will and Jada—what they doing with other people?’ Will and Jada ain’t really doing too much of nothin. Will and Jada are on a spiritual journey to cleanse the poisonous, unloving parts of our hearts. And we’re doing it together in this lifetime no matter what.”

The actor noted that their relationship is better than ever now.

“Me and Jada, to this day, if we start talking, it’s four hours. It’s four hours if we exchange a sentence. It’s the center of why we’ve been able to sustain [our relationship] and why we are still together, not choking the life out of each other—the ability to work through issues. I’ve never met another person that I connect with in conversation more blissfully and productively than Jada.”

At the 2022 SAG Awards, E! red carpet host Laverne Cox took a moment to speak with the couple and mentioned that she was thankful “for all the years of joy you’ve brought us. We can’t wait for more Red Table Talk and more ‘entanglements,’” to which Jada laughed and responded, “No more of those!”

Jada pinkett Smith says she’s DONE with entanglements during her interview at the #SagAwards w/ Will Smith pic.twitter.com/kfiAnzCbWl

The King Richard star was interviewed by Gayle King on CBS Sunday Morning and shut down speculation that he and Jada ever accused each other of cheating in the past. “Never. There’s never been infidelity in our marriage…And we have never surprised one another with anything ever..I have decided that chatter about my life can be of a benefit to people. I think that chatter is the first stage to having a real conversation and being able to truly explore if some of the things in your heart are loving, or poisonous.” Welp, that certainly clears things up!