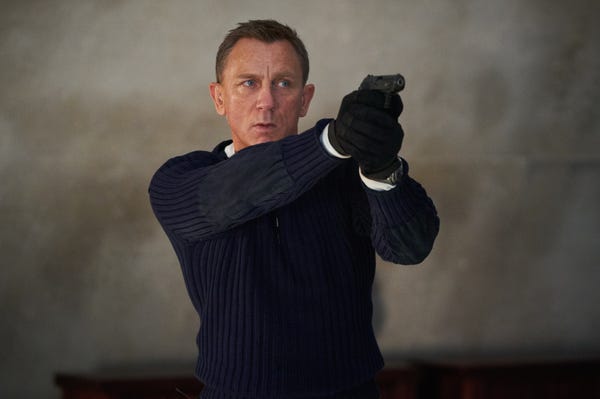 A James Bond superfan from London said that ten years of his life went "down the crapper" when his unique collection of 007 prop guns was stolen earlier this year.

And now John Reynolds, who is going by the pseudonym Mark Hazard — 007's alias — is offering to meet the people responsible for the theft with a £5,000 ($6,454) cash reward to secure the return of his prized guns.

In a short video published by the Daily Mail, Hazard urged the culprits to come forward and collect the money before they receive a "knock on the door and a very different, less-profitable reward."

In the video that was posted against the advice of the detectives on the case, Hazard said: "Ten years of my life went down the crapper when they were stolen. Ten years of research to find them and write about them, ten years of my life to get the funds together to secure them, and barely a year of my life to physically own them or at least be their temporary keeper."

Speaking to The Times of London, Hazard said: "Hopefully, I would meet with one of their representatives. There's not going to be any entrapment. They're not going to meet me in a field and then the police will turn up. They're not stupid. But I've got to treat them in this way, otherwise I will not get them back.

"I think they were stolen to be used in crime — I don't think they knew they were deactivated and film guns. Film guns are modified so you can never fire live ammunition from them again. It's such a loss — they are film history."

The stolen guns, which formed part of a much larger collection of one-of-a-kind posters, clothing, and other 007 memorabilia was set to be displayed as part of a new James Bond exhibition in London when it was stolen from Mark's home in early March.

The set includes a Beretta Auto Pistol from "Die Another Day" and a unique 44 Magnum handgun from "Live and Let Die."

Detective Inspector Paul Ridley, who is investigating the theft, told The Times that Hazard's offer to meet those responsible was inadvisable: "For me, someone's safety is more important."

There will never be a female James Bond, according to the family that holds an 'iron grip' on the series