Of all the old haunts and mom and pops that have closed in New York City since the pandemic began, no establishment has been mourned quite like Gem Spa, an old bodega on the corner of St. Marks Place and 2nd Avenue that first opened in the 1920s. It survived the East Village’s transformation from an immigrant hamlet into a hangout for hippies and punks and then a playground for New York University students.

Gem Spa’s final days resembled a wake as New Yorkers stopped by to pay respects to a corner store once frequented by Jean-Michel Basquiat, Patti Smith and Allen Ginsberg. Locals savored one last egg cream (the concoction is said to have been created there) and bought T-shirts as nostalgic keepsakes. A campaign to save the place, which had been struggling for a while, galvanized the neighborhood, but lockdown proved fatal. When the shop was shuttered, someone scrawled onto its front, “New York City is Dead.” Then the city moved on, and one of the last gritty accents of St. Marks was sanded away without a trace.

Gem Spa’s quirky unofficial mascot, a gnarled Zoltar fortune telling machine that stood outside the shop for years, luring passers-by to feed it $2 to hear their fates, improbably survived the shop’s demise. It now sits outside OMG Pizza in Bushwick, where it has been prophesying people’s futures in relative obscurity all this time.

As an above ground M train rollicked past the intersection of Myrtle Avenue and Cedar Street one lonesome day some time ago, a mystic hustle emitted from the machine’s rusty soundbox.

“I am Zoltar. The great Gypsy. And I can see your fortune. Come see it too, no?” 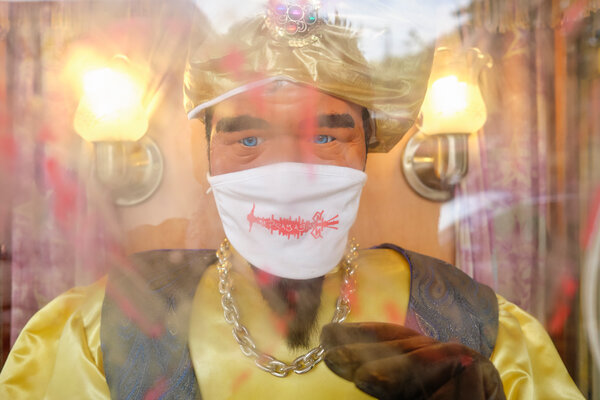 Zoltar’s pleas went ignored throughout the afternoon until two friends walking by remarked aloud how Zoltar machines give them the creeps. When they were informed that they were looking at the Gem Spa Zoltar, they turned nostalgic, not to mention confused.

“I definitely put a few bucks into that thing when I was drunk,” said Patrick Reid, 30. “After skating in Tompkins we’d meet up on St. Marks and pull up to it, maybe hang out a bit in front of it before heading off to the next adventure. He told me once I could walk a path to greatness, but I think he’s bad juju.”

“It’s bizarre this remnant of Gem Spa has ended up here in nowhere Bushwick,” said Amrit Dhillon, 26. “It’s interesting to see how New York eats itself up and spits itself out again, like a living organism.”

Saddam Alsaidi, 27, who works at the pizzeria, knew of Zoltar’s past life across the river. “I know he used to be famous in the East Village,” he said. “He was a big deal.”

Zoltar was installed outside of Gem Spa in 2012, and while it never saw the street’s punk rock heyday, it witnessed the fumes of old St. Marks.

The animatronic fortune telling machines entered American pop culture in the late 1980s with the movie, “Big,” starring Tom Hanks, in which a boy encounters a Zoltar at a fair and makes a fateful wish to become an adult. Indeed, the Gem Spa Zoltar added a carnivalesque touch to St. Marks alongside its nightlife revue of bars, tattoo parlors and head shops. Strolling up to it for some whimsy was a rite of passage for many Manhattan teenagers, along with the first underage beer.﻿

The mystery of how Zoltar ended up in Bushwick was solved by calling the phone number on a coin-operated claw game that now sits beside the machine. The number, printed on a sticker labeled “Fabers Game World,” led to Carlo Muraco, and this is what Mr. Muraco had to say: “Yeah, that’s the Gem Spa Zoltar. I brought it directly from St. Marks to Brooklyn with my van.”

“I do all the Zoltars in New York pretty much, actually,” he said. “If you see a Zoltar it’s most likely mine. I got a few in Coney Island, too. But this one is special. Gem Spa was famous and this Zoltar is part of its legend.”

Mr. Muraco, who used to operate video game arcades and now runs businesses in Coney Island, began introducing Zoltar machines into New York a decade ago. At Coney, he owns a Zoltar at Margarita Island, another at Surf City Pizzeria and one on Stillwell Avenue, and he provides a Zoltar to the annual Feast of San Gennaro in Little Italy. When Hurricane Sandy ravaged Coney, he said, only his mystical Zoltar machines survived intact, because they floated.

In the 1990s, Mr. Muraco owned a variety of games along St. Marks, and he befriended Ray Patel, the owner of Gem Spa. They eventually went into business together on a Zoltar and divided its profits. As the street’s gentrification accelerated, Zoltar became Mr. Muraco’s last amusement on St. Marks.

But in 2019, Gem Spa lost its cigarette and lottery licenses after an employee made an illicit sale to an undercover cop. The shop never recovered financially.

Mr. Patel’s daughter, Parul, who started running the newsstand after her father grew ill, began selling Gem Spa branded streetwear and introduced a vegan egg cream. She also eliminated the bodega’s lonely overnight shift to save money, and cleaned up its grimy shopfront in hopes of getting on their landlord’s good side. This involved dealing with Zoltar — and she quickly fell into disagreement with Mr. Muraco.

She proposed that Zoltar could be moved inside the shop near the potato chips. Mr. Muraco insisted that Zoltar needed to stay outside, among the people, where a Zoltar machine belongs. She said then he would need to install a protective cage around it to prevent vandalism. He didn’t want to. And so one day that spring, Mr. Muraco moved Zoltar to Brooklyn. Not long after he did, Gem Spa’s woes worsened.

Ever since Gem Spa closed, Ms. Patel has been trying to keep the corner store’s legacy alive. An auction of the shop’s miscellany that included its yellow signage, syrup pumps and metal roll-down gates was held earlier this year (one sign went to a writer who lives in Red Hook who planned to put it in his barn upstate). She’s also continued selling Gem Spa merchandise like egg cream glasses and has toyed with the idea of Zoltar figurines.

But she didn’t know what had happened to the machine itself.

“I’d only heard he’s out there in Bushwick,” Ms. Patel said. “It’s nice to know there’s a piece of us still out there in the city. Even though he’s not in the East Village anymore, he is a real living artifact of Gem Spa.”

As the city comes back to life in fits and starts, Zoltar is getting to tell the fortunes of New Yorkers again, and he’s been busier than ever as of late.

On summer nights outside the pizzeria, cars now drive past Zoltar blasting music from open windows and drunk friends take turns pushing dollar bills into him. And his words of wisdom, printed on yellow cards, are sputtering out again.

“A new turn of events will soon come about,” read a recent one. “A happy reunion with a loved one will make life all that you ever wanted it or dreamed it to be.”