It’s going to be a while before we can hug freely again. What does that mean for our mental health? 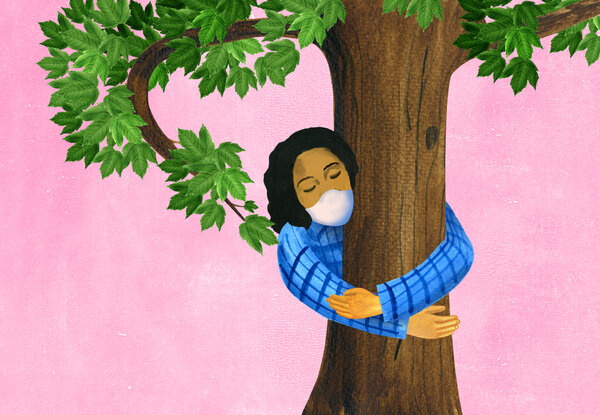 Back in June, a few hundred epidemiologists and infectious disease experts interviewed by The New York Times said that it would likely be a year or more before they would feel comfortable hugging or shaking the hand of a friend. Thirty-nine percent said it would likely be three to 12 months. (Also of note: Many said they never shook hands anyway.)

Even for the non-epidemiologists among us, everyday touch has become a source of stress — and a negotiation of personal boundaries — in a way that it never was before the coronavirus pandemic.

Some people have gone many months without touch: It was one of the first things we were cautioned against, even before social distancing, masks and stay-at-home orders became the new normal. And eventually, its absence can give way to touch deprivation, which can lead to health issues like anxiety and depression, according to Tiffany Field, the director of the Touch Research Institute at the University of Miami, who has a Ph.D. in developmental psychology.

Dr. Field calls touch “the mother of all senses,” and in her 2001 book, “Touch,” she argues that American society was already dangerously touch deprived, long before the coronavirus exacerbated it.

What kind of touch are people missing?

When asked what specific touch they missed the most, the answer was identical for everyone I interviewed: hugs. Anita Bright, 51, a professor at Portland State University in Oregon who recalled being unable to hug a student who defended her dissertation in early March, said she especially missed the tighter, longer hugs that accompany a reunion.

Jo Carter, 50, a project manager at the University of Wisconsin in Madison who lives alone, said that, pre-pandemic, she would regularly get massages and pedicures to have consistent touch. During the lockdown, she found herself crankier and more restless than normal, “hangry” almost, she said.

In addition to sleeping under a weighted blanket, Ms. Carter has begun cuddling the teddy bear she has had since grade school.

Sarah Kay Hanley, 41, who works in banking compliance in Oregon City, Ore., had a dream recently in which she was touching her friend’s freshly shaved head, which she had seen on a video call. She instantly got a tingly, A.S.M.R.-like itching in her hands, remembering viscerally the sensation the tiny hairs create.

“It feels warm and prickly if you rub one way, and soft the other,” said Ms. Hanley, who used to work as a hairstylist. People with buzzed heads rub them against your hand like a cat being petted, she said. She described touch deprivation as “a feeling of being totally disconnected from understanding how I felt physically.”

For Jenna Cohan, 32, who does advocacy work against domestic and sexual violence in Portland, Ore., the reminders were continual. She would see dogs walking by outside her window, and realize constantly that she couldn’t be outside and petting them.

Dr. Bright said it’s not rare to see the children of her colleagues and students venture into a Zoom screen and casually touch or embrace a parent. Recently, when a colleague’s 5-year-old child did that, Dr. Bright reflexively grabbed her own.

In the beginning of the pandemic, she found herself high-fiving low-hanging tree branches in a nearby park where she takes her daily walks, she said. She even has a favorite tree in her neighborhood park because it was often the only living thing she saw every day.

“It is the same body sensation that I would have in high-fiving a human,” she said.

How to cope with touch deprivation

Dr. Neel Burton, a psychiatrist and the author of the books “Hypersanity: Thinking Beyond Thinking” and “Heaven and Hell: The Psychology of the Emotions,” believes touch is the most neglected of our senses.

In 2017, Dr. Burton, who lives in Oxford, England, wrote an article in Psychology Today about where that neglect comes from and the sometimes-cultural aversion to touch. This aversion can also dictate, he said, when and how intensely touch hunger may kick in for someone: age, genetics, coping mechanisms and the frequency of touch pre-pandemic are the other determining factors.

“Some people may feel it within a week, others may never feel it at all,” Dr. Burton said. “No doubt the thought that you cannot hypothetically access touch — for example, by seeing a friend, or booking a massage — makes the craving worse than it would otherwise be.”

A 2013 study found that touch was the most important nonverbal behavior in the nursing profession when treating older patients: “In old age, the tactile hunger is more powerful than ever, for it is the only sensuous experience that remains."

Trevor Roberts, a psychotherapist in Bournemouth, England, is worried about people getting used to being alone, isolated and untouched. “Not to touch will become normal, not to visit family or just talk to them on Skype,” he said. “There is no substitution for human touch.”

Dr. Field, of the Touch Research Institute, described one treatment as “moving the skin.” The action is not just stroking, according to Dr. Field, but moving your skin forcefully enough to cause indentations and hit the pressure receptors.

Some other ways to move your skin? Scalp massages, abdominal crunches, brushing your entire body in the bath, wearing compression clothing or even just rolling around the floor can fire up the pressure receptors. Similarly, putting a 10-pound bag of rice, flour or equally soft, weighted material on your chest will have the same effect as a weighted blanket, according to Dr. Field. She also believes doing yoga is just as effective as getting a massage.

Mr. Roberts suggested seeking out different textures. Caressing and concentrating on the feeling of silky, furry, smooth and even rough surfaces, he said, can awaken the kinesthetic part of our minds.

“Some isolated people were isolated even before all this kicked off,” Dr. Burton said. “I like the idea of a bubble, whereby a household could bring in an isolated person from another household.”

A couple of months ago, Ms. Carter invited a platonic single friend, who also lives alone, to be a part of her “Covid pod.”

“That first hug was both wonderful and odd, like it should be more momentous than it was,” she said. “I was so unused to being untouched by that point that it felt like I wasn’t quite sure that this was OK, at a gut level.” Ms. Carter said her friend is “a good hugger and a good friend, so it was good, but it took a couple of repetitions to relax into it.”

While they live separately, they practice similar precautions and see each other multiple times a week. “We get to hang out together, unmasked, within six feet,” Ms. Carter said. “Essentially, we act as if we’re part of the same household.”

Getting comfortable with such an idea and bringing a friend on board took her months. A few weeks ago, though, they added two kittens — Merry and Pippin — to the pod.

“Both of those moves are with an eye toward the colder months, when I think I’ll be even more touch starved,” Ms. Carter said. She is hoping to expand her pod to 10 humans for the winter.

Ms. Cohan in Portland has found herself still being more cautious than most people, not as nervous for herself when it comes to the virus, but wanting to do what she can to not spread it to others.

“I have hugged exactly one person,” she said, and that was a friend who was visiting from out of town and both were masked. “I am not going into homes or inviting people into mine. I’ve seen my family once, outdoors.”

Dr. Bright, on the other hand, flew to go see her parents and hugged them, but not without a great deal of anxiety about infecting them. Ms. Hanley, too, opened up her household to include her sister. After being unable to see an aunt who died or visit a friend in the hospital who had suffered a stroke, she said the decision to not be alone anymore wasn’t difficult.

“The effects on my mental health after no contact for months was getting downright scary,” Ms. Hanley said. “The only real solution was to find ways to get some more human contact.”

Ms. Hanley joined a reduced-capacity gym where precautions such as temperature taking and frequent sanitizing are in place; members tend to give each other socially distanced high-fives. She has also hosted five friends at different times in her home but isn’t blind to the risk. Ms. Carter called it her “risking touch credits.”

“I met a new executive, and he shook my hand,” Ms. Carter said. “What a lousy reason to spend ‘risking touch’ credits, you know? I’d much rather clasp the hand of a friend or someone who meant something to me.”