Jason Bolicki and Adam Schloff each realized that they were in love just a few months after they initially met, which was in July 2015. By New Year’s Eve of that year, both had concluded that they should get married.

But neither of them was quite clear on the protocols involved — who should propose to whom, for instance — and there were plenty of other things keeping both of them busy. So they didn’t get around to getting engaged.

“We sort of kept putting it off,” Mr. Bolicki said. “It was always like a given. When we buy a house together, down the road. When we’re old. It was always a conversation, from 2016, it was always looking far, far into the future. And we were always with one another.”

On June 18 — without an official proposal — the two were married at Congress Hall in Cape May, N.J., before about 120 guests. Brian Offutt, a friend of the couple who became a Universal Life minister for the event, officiated.

The couple actually began making their plans in 2019, “imagining that we would invite a few friends and go to City Hall,” said Mr. Bolicki, now 39. “That did not happen.”

Mr. Schloff said that because L.G.B.T.Q. marriage is still so new, it can be hard to know how to proceed.

“You can write your own rules, but that also means it’s kind of wide open,” he said.

The two met through Grindr, the dating app for gay men, after Mr. Bolicki, who had recently moved to New York and ended a relationship, downloaded the app.

“I said, ‘You seem fun,’ which he did,” said Mr. Bolicki, who is the founder and executive producer of Exit Four, a television and digital media production company in New York that specializes in unscripted shows. He graduated from Northwestern. 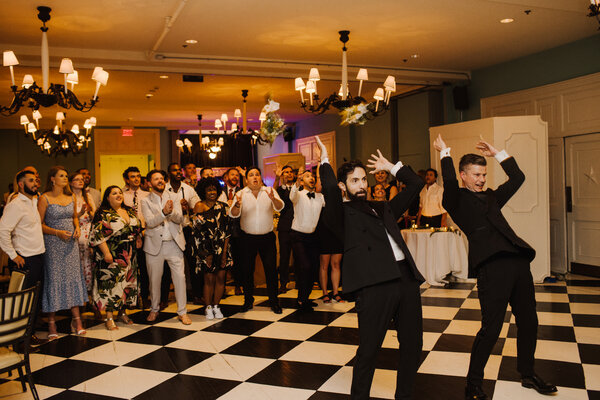 Mr. Schloff, who is 36 and the director for development and design at Astral Weeks Development, a real estate company in New York, was entranced right off by Mr. Bolicki.

“He has beautiful eyes and they are really a window into the amazing kind of person he is,” said Mr. Schloff, who is a graduate of the University of Michigan and received a master’s degree in real estate from N.Y.U.

Mr. Schloff nixed Mr. Bolicki’s first choice for a meet-up spot, deeming it a “bro bar,” and instead chose a place across the street.

When they met, their chemistry was instantaneous.

“We met for a drink and ended up having a whole night out together,” Mr. Schloff said, remembering that they shared their first kiss that evening, on the street, after finding that their hands had intertwined. “The next morning, we went to brunch.”

Both are outgoing and enjoy socializing, and that soon became part of what made each of them certain that he’d found his partner for life.

“I just feel we’re just incredibly in sync in terms of our values, our interests, our friends, our opinions of people,” Mr. Bolicki said. “When we meet someone, we have the same reaction.”

The two together became involved with New York’s Lesbian, Gay, Bisexual and Transgender Community Center, and after an event one evening for the organization in the summer of 2019, they found themselves at a French restaurant, once again talking about their own future.

And, suddenly, their route to a wedding was clear to them.

“We said, We should set a date. We’re not going to do an elaborate proposal, but let’s do this,” Mr. Schloff said. “We’re ready.”