Kalyn Saulsberry’s profile on the dating app Coffee Meets Bagel said that she liked 1990s things, which Vincent Fong saw as a perfect opportunity for connection.

So he posed a question: Backstreet Boys or ‘N Sync?

“She said Backstreet Boys,” he said. “Not the right answer, but it was a great jumping off point.”

It was April 2017 and both lived in San Francisco. She had been intrigued by his cooking pictures and by his self-portrait, which showed him looking off to the side. “I thought it was mysterious,” she said. “I wanted to know what he was looking at.”

The two met for coffee and their conversation was effortless. Both thought their date was going well. “We just clicked,” she said.

Until, abruptly, she left, as she had heard from a roommate, who was also on dating apps, that she should, for the best chance at getting a second date.

“Right at the two-hour mark,” she said. “I was just trying to leave him wanting more.”

“I said, well, she’s running away so I have to make sure she knows who I am,” Mr. Fong said. “I wanted to keep the conversation going.”

Over the next few days, as the two texted each other, it became clear that she was interested after all. On the second date, about two weeks later, there was no ambiguity.

“There was such an incredible amount of serendipity,” Mr. Fong, 31, said. He described a day that began at the Asian Art Museum, moved on to Fisherman’s Wharf where they played games in a penny arcade and admired the sea lions, then to Pier 39.

Hours and hours after the date had begun, Mr. Fong walked Ms. Saulsberry home and the couple shared a first kiss. 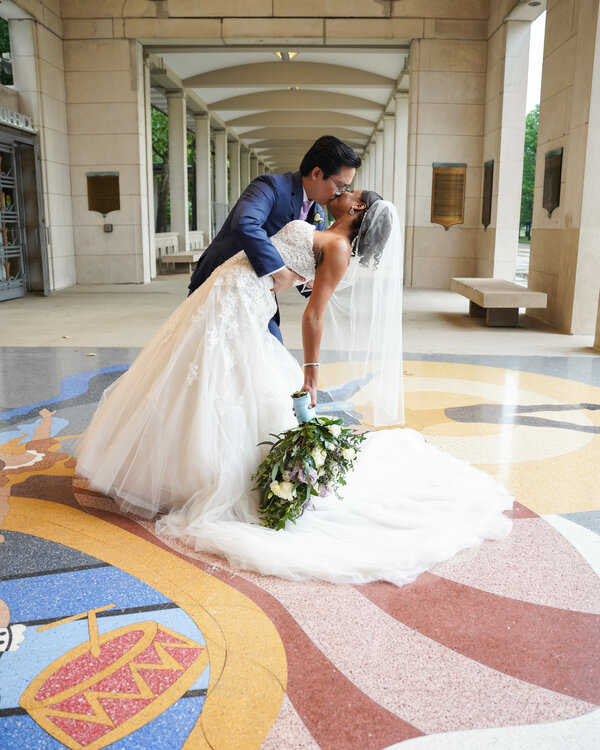 Two months later, Mr. Fong moved to Los Angeles for a new job. He is now a product manager there for Netflix. He graduated from Santa Clara University.

Ten months after that, Ms. Saulsberry, 29, also moved to Los Angeles. She is now a program manager in the Costa Mesa, Calif., office of Experian Health, having received an M.B.A. from the University of California, Los Angeles, in June. She graduated from Harvard.

“I don’t think I would have had Los Angeles on my radar if not for him,” she said. “Shortly before I moved to L.A., I had a lot of personal issues in my life, and Vincent had been so supportive during all the hardship I was facing. To me, a partner is someone who is there for you when things aren’t going well.”

By January 2019, the two were talking about their future together, and Mr. Fong began once again planning to present Ms. Saulsberry with a question that would decide that course.

She warned him that she wanted some notice before he proposed so that she could make sure she was aesthetically prepared.

“Vincent planned it out really nicely,” she said. “It was July 2019. We spent a weekend in Malibu, I had my hair and nails done, we went to the beach at sunset.”

Mr. Fong had overlooked just one small matter, though, in selecting the site for his proposal: high tide.

“I was dumbstruck,” he said. Ms. Saulsberry’s dress was soon soaked, as the two slogged through a foot of cold Pacific seawater. The photographer, who was following along behind, ended up losing her shoes to the sea.

Eventually, Mr. Fong said, he pointed to a dry spot and popped the question. Her answer this time was what he’d hoped it would be.

“I’m just thankful that she trusted me enough to walk through all those waves,” he said.

They were married June 19 at Lumen, an events space in St. Louis, Ms. Saulsberry’s hometown, with just nine guests. The couple will both use the surname Saulsberry-Fong.