A hurricane ruined Yoelvis Valdez’s plans to propose to Anabel Santeliz. And their wedding was first postponed because of a cancer diagnosis, then because of the coronavirus. But when two friends came to the rescue, the couple finally got their wedding in a backyard tent drenched in pink roses and candlelight.

Mr. Valdez, 32, and Ms. Santeliz, 29, first met in July 2012. She was working as a cashier at Xios, a men’s clothing store, in the Woodbridge Center shopping mall in New Jersey. Mr. Valdez was friends with one of her co-workers and would frequently stop by. “He would only speak to my friend because he couldn’t muster up the courage to introduce himself to me,” Ms. Santeliz said. “Initially I thought that he was interested in my friend.” But he finally messaged her on Twitter and asked her out. 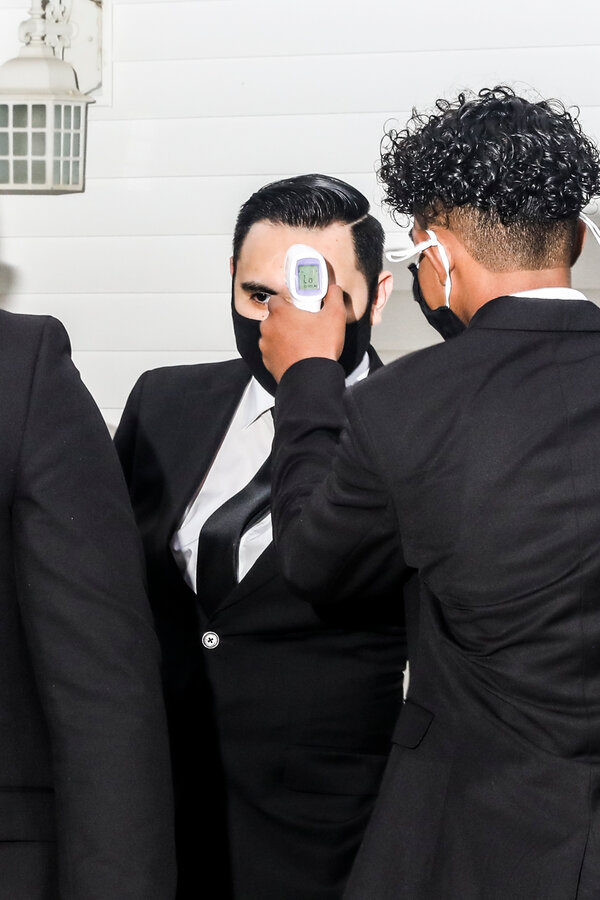 Mr. Valdez and Ms. Santeliz currently live in Aberdeen, N.J. Before the coronavirus pandemic, Ms. Santeliz, who came to the United States from San Salvador when she was 7, had worked as a paralegal in Union County, N.J.

Mr. Valdez, a native of Queens, is a federal law enforcement officer based in New Jersey. He also served 10 years in the Army National Guard.

In those early days of dating, Mr. Valdez and Ms. Santeliz knew there was a strong possibility he might be deployed one day. And he was, in March 2014, to Kuwait, with missions throughout the Middle East, including Iraq, Afghanistan, Jordan, the United Arab Emirates and Saudi Arabia.

When Ms. Santeliz heard the news he had been deployed, she had no doubt that she would wait for him. “In that moment I realized that regardless of what life may throw our way, I wanted to get through it together,” she said.

Mr. Valdez said that she would send a themed care package “filled with goodies, pictures, and notes telling me how strong I was and how much she missed me.”

“She would check up on my family and take care of all my affairs stateside while I was away,” he added. “I came back from deployment and I knew right then and there I never wanted that feeling with anyone else. She was the one, my one.”

After five years together, Mr. Valdez decided it was time to propose. He planned a vacation in St. Thomas, in the U.S. Virgin Islands, for September 2017. “I had found the perfect location, hired a photographer, and prepared everything for the proposal,” he said.

But just a few days before their trip, Hurricane Irma tore through the region. Mr. Valdez didn’t want to wait any longer to ask Ms. Santeliz to marry him, so he planned a night in New York City with some of their close friends. “We took a walk in Williamsburg near the Brooklyn Bridge before dinner,” he said. “With the city skyline behind us and our friends nearby to capture the moment, I poured my heart out to Anabel and asked her to marry me. She, of course, said yes.”

[Sign up for Love Letter and always get the latest in Modern Love, weddings, and relationships in the news by email.]

The couple had planned to marry in December 2019. But on Oct. 31, Mr. Valdez learned he had a rare bone cancer, jaw osteosarcoma. “The doctors thought it was crucial for him to start his treatment as soon as possible and so we made the decision to cancel the wedding and focus on his treatment,” Ms. Santeliz said.

They decided to have a destination wedding in the Dominican Republic in October 2020.

To prepare him for surgery, Mr. Valdez received chemotherapy for three days a month for three months. “On Dec. 6, 2019, what would have been our wedding date, Yoelvis and I were at the N.Y.U. Cancer Center as he received his first round of chemotherapy,” Ms. Santeliz said.

The hope was that the chemotherapy would shrink the tumor, making removing it easier. Even though the chemotherapy helped, “the tumor was still very large, aggressive, and invasive,” Ms. Santeliz said. On Feb. 27, Mr. Valdez had surgery to remove the mass from his jaw.

The doctors took the fibula from his leg to reconstruct his jaw after the tumor was removed. But, because of Covid-19, Ms. Santeliz said, he did not resume chemotherapy again until the end of April. “His oncologist wanted to decrease his chance of exposure to the virus and avoid him traveling into New York City for treatment.” Mr. Valdez’s second round of chemotherapy began in April and finished in July.

On July 13, his scans showed that he was cancer free. “At this point we thought he was done with treatment and we could move on with our lives,” Ms. Santeliz said. “However, his surgeons felt that as a preventive measure, because of the magnitude and severity of the tumor prior to surgery, he should undergo radiation as well.”

He is currently receiving physical therapy to aid with the swelling and fluid buildup that radiation caused and he will be going for another set of scans at the end of the year, Ms. Santeliz said. “To see the love of my life, the strongest man I know, at his lowest and weakest point as he fought for his life is something I wouldn’t wish on anyone.”

Their plans to wed in the Dominican Republic had to be scrapped because of the coronavirus. “Once the U.S. and other countries started shutting down, we knew that we would no longer be able to have our destination wedding,” Ms. Santeliz said.

“We’ve waited long enough and been through enough and it’s finally our time to celebrate our love and our victories,” Mr. Valdez added.

Then some friends of Mr. Valdez, Juan and Adriana Gonzalez of Manalapan, N.J., offered a new plan.

Mr. Gonzalez and Mr. Valdez’s friendship dates back to high school. Ms. Gonzalez met Mr. Valdez about 15 years ago and said, “He became like a brother to me.”

One sunny afternoon in mid-July, the two couples were having lunch when Ms. Gonzalez told them they just had to do something to celebrate love’s triumph — something like a backyard wedding.

“Yoelvis asked, ‘Your backyard?’ I said ‘Sure. Let’s do this.’ And just like that, the wedding was back on track,” Ms. Gonzalez said.

“Given that we had already canceled our wedding plans twice, we decided that we didn’t want to wait any longer to have our wedding,” Ms. Santeliz said. “Now that he is in remission, we want to start our lives and start a family together. We see everything that has happened in the last year as a sign that having a big wedding is not what’s important.”

“The biggest thing we had to change was the guest list, which was really hard to do,” Ms. Santilez said. Initially their guest list included about 150 people.

“Yoelvis has a huge family,” she said. “He’s the youngest of eight and the only one without kids. He has tons of nieces and nephews.” None of those nieces or nephews were invited. They kept the list to parents, siblings and their significant others, and the wedding party.

Although the couple didn’t require guests to get a Covid test, they did recommend it by sending an electronic notice to guests about two weeks before the wedding using the same app they used for their invitations. “Yoelvis and I got tested a couple of days prior and some of our family got tested as well,” Ms. Santeliz said.

On the evening of Oct. 23, under a white tent, embellished with roses and lighted by candles, Mr. Valdez and Ms. Santeliz finally had their wedding. Ms. Santeliz wore a lace mermaid gown with a long train and a cathedral veil, the same dress and veil she was going to wear on their original wedding date. “I absolutely loved my gown and I’m so happy I finally got to wear it,” she said. Mr. Valdez wore a dark blue jacket with black lapels and black pants.

With 35 guests gathered, the ceremony was performed by Brandon Hurley, a Universal Life minister, who has known the couple since 2016. “I feel a wedding ceremony should be fun and a show of love for the couple,” Mr. Hurley said. “But Covid-19 has really reinforced to just make sure the people you love most are there.”

It was an outdoor wedding, so the couple provided masks but did not require them outside. “A lot of guest wore masks most of the time, which I wasn’t expecting,” Ms. Santeliz said.

Both Mr. Valdez and Ms. Santeliz agree that the best moment of the night was their first look. “It was a moment we got to share with just us and Yoelvis’s reaction when he saw me was the highlight of my day,” Ms. Santeliz said.

They had decided on Playa del Carmen, Mexico, as their honeymoon destination, but, Ms. Santeliz said, “Mother Nature loves to mess with us. So it was only fitting that our first night in Mexico they got hit by Hurricane Zeta and we had to evacuate our rooms and spend the night at a shelter in the hotel.”

Still, they couldn’t have been happier.

“It was a true moment of reflection in which we both recognized that no matter what this crazy life throws our way we’re going to make it through together,” the bride said.

Where In the backyard of the Manalapan, N.J., home of Juan and Adriana Gonzalez

In Solidarity Because of radiation treatments, Mr. Valdez lost his hair, including his beloved beard. “Yoelvis was very sad about this, so all of his groomsmen and our officiant decided to all shave their facial hair in solidarity with him and to show their love and support for him,” Ms. Santeliz said.

More Covid Precautions Masks were mandatory for anyone going inside the Gonzalez home to use the bathroom during the wedding and reception. Hand sanitizer, sanitizing wipes and masks were placed at the entrance to the house and sanitizer was available in bathroom as well.

Quarantine Period The couple quarantined following their return from their honeymoon and Mr. Valdez was tested before returning to work. “It was easy for me to stay home because I’m not working right now and Yoelvis stayed home for a week and after his test came back negative they put him back on the schedule,” Ms. Santeliz said.