Where does American fashion go from here?

The collection presentations that kick off Sunday may be the most splintered since New York Fashion Week began more than 75 years ago, with dueling CFDA and IMG calendars and digital platforms, multiple formats and seasons, and some designers showing fall, some spring, some in-between and some of the biggest names straggling behind to April and May — or not showing at all.

But against the odds, designers have been prepping collections, shooting look books and creating short films all while coping with slashed budgets, supply chain issues, COVID-19 cases in the sample room, and snowstorms — and trying to social distance while creating in one of the most intimate of industries.

“Fashion is in a really rough place. People are not shopping anymore, there are no events, no parties, there is nothing to buy for necessarily,” said designer Christian Siriano, who is hosting one of the few physical events, on Feb. 25, to roll out his “psychedelic lodge” inspired collection. “The biggest thing to figure out is how do we get people excited about clothes again?”

But with adversity comes opportunity. And there’s nothing like a global pandemic to knock the snobbery out of fashion.

“No matter how successful you are, how many retail stores you have or how fabulous you are, it comes down to survival,” said LaQuan Smith, who is racing to finish fittings and production in his Long Island City studio in time to shoot the fall look book and short film, which he will present March 9 on IMG’s NYFW.com.

Jonathan Cohen, Markarian, and Sergio Hudson on Being in the Inauguration Fashion Spotlight 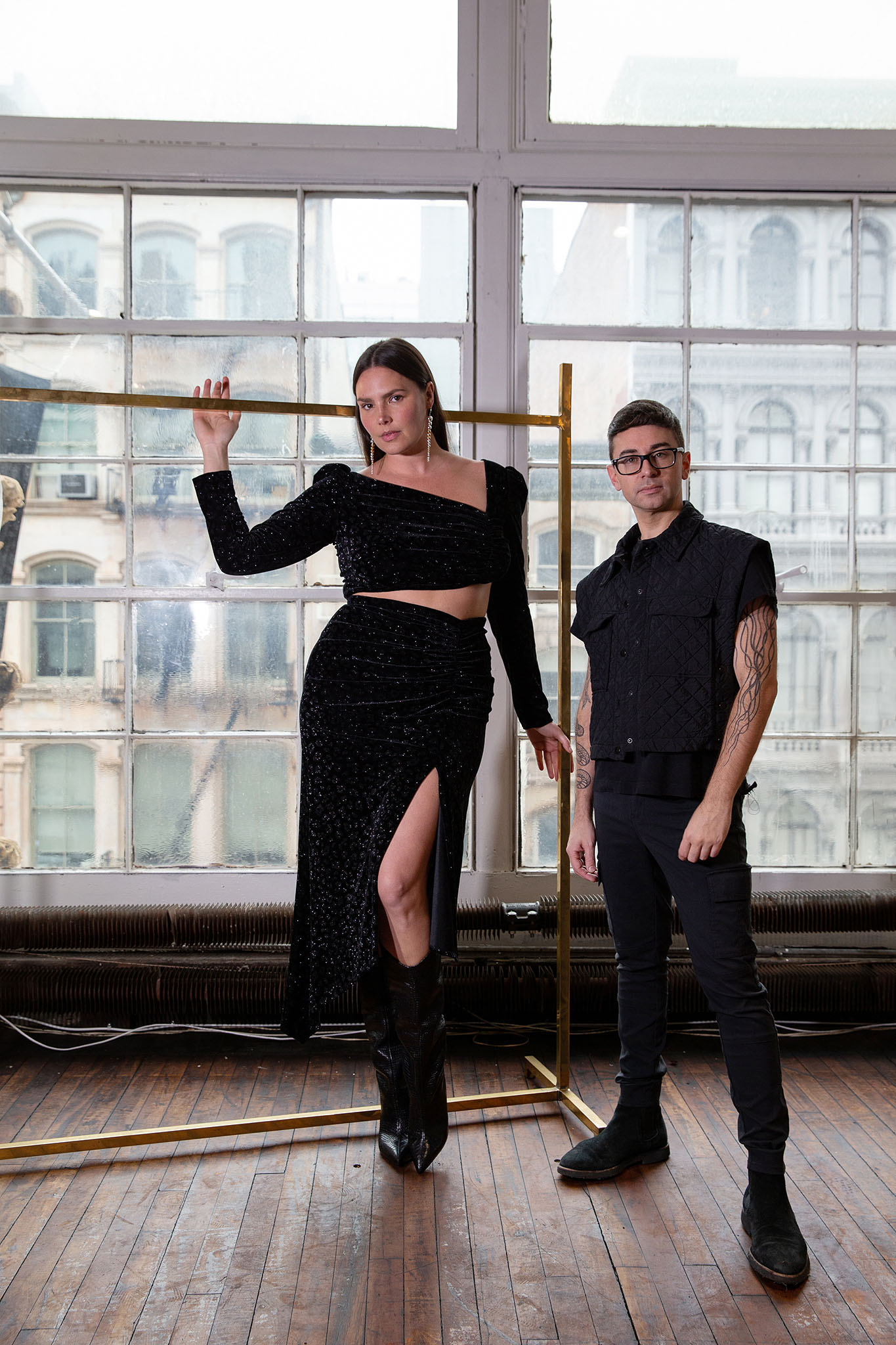 Christian Siriano and Candice Huffine in a look from his Fall 2021 collection, pictured at his new Soho studio. Lexie Moreland/WWD

Prabal Gurung, for one, feels liberated by the new possibilities for showing in person or virtually, any time of year and anywhere, and not necessarily having to break the bank on a runway show. After skipping presenting spring, he’s on the IMG schedule again, an early bird actually, dropping his pre-fall and fall collection look book Feb.12 at NYFW.com.

“As much as the world is used to seeing us take a bow at the end of a runway, for the longest time our hands were tied and now we feel free,” said Gurung, who has been re-energized creatively these past few months by the New York streets, from the Black Lives Matter protests in Washington Square Park to the promenading kids and drag queens in their vintage finery at Chelsea Piers.

“For so long, New York had been the playground of the elites, but they’ve all left and now it’s filled with kids and vogueing and dancing,” he said, aware that any discussion of elitism can only go so far when it relates to a nonessential like fashion. (Of note: He’s lowered his collection prices by 20 to 30 percent.) “Today, a woman can wear whatever she wants,” said Gurung, using as an example the historic rise of Vice President Kamala Harris, whom he dressed in an understated look for the Jan. 21 national prayer breakfast. “But not every designer is going to make sweatpants and sweatpants are not forever.”

Among independent designers there is hope that the pendulum could be swinging, ushering in a new possible future for American fashion to be less corporate and bottom-line driven, more inclusive and grassroots.

“It feels like a progressive time that’s about empowering brands and not just setting them up for the business of fashion week,” said Phillip Lim, who is presenting his fall look book Feb. 18 on Runway360.com, which has American Express as a sponsor, while NYFW.com has rival Visa, among others. 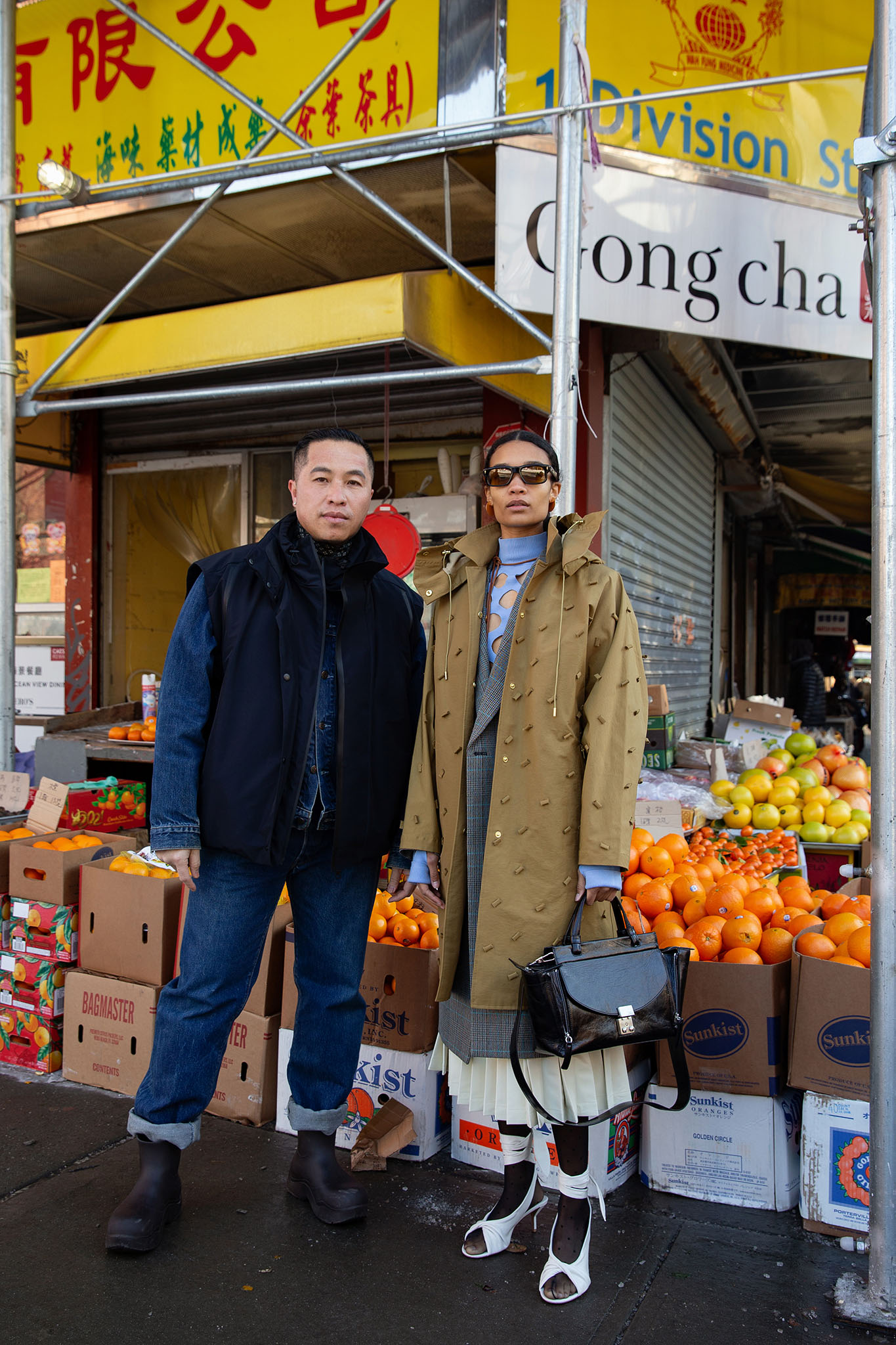 Phillip Lim and a model in a look from his Fall 2021 collection, pictured in Chinatown, where he recently moved his studio. Lexie Moreland/WWD

As the retail and media hierarchies crumble, reaching the end consumer is paramount for brands of all sizes, whether that’s on social media, through the fashion week digital platforms or in real life. So Carolina Herrera will follow the release of its 40th anniversary collection on Feb. 23 with a tour bus taking to the streets of New York in the following weeks. “I’m not sure we’re ever go back to the rectangular white runway. We’ve become more creative and open minded about storytelling, the power of social media and the global audience. A collection now should culminate in a celebration and activations,” said creative director Wes Gordon.

But even as designers go their own way, doing what is best for them individually and in isolation because of COVID-19 restrictions, many are missing the camaraderie fashion week brings.

“So much of the aggregate energy around showing has evaporated,” said Ulla Johnson, who filmed her fall collection at Lincoln Center’s David H. Koch Theater to support one of New York’s struggling cultural institutions, where she and her family have been missing attending ballet performances. “It feels like we’re on islands of our own.” 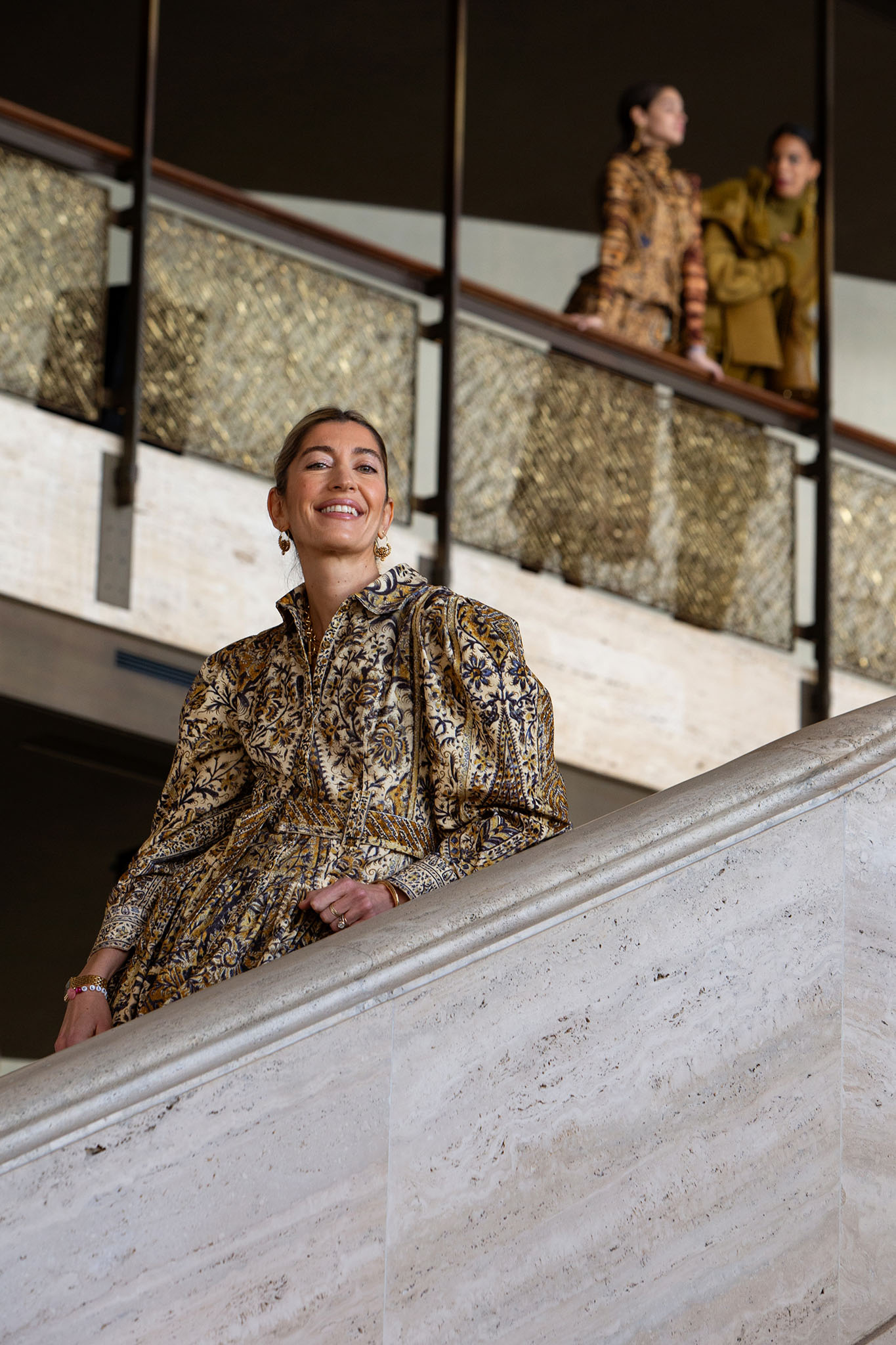 Ulla Johnson taking a break from filming her fall collection at Lincoln Center’s David H. Koch Theater, which she wanted to support as one of NYC’s many cultural institutions closed because of the pandemic. Lexie Moreland/WWD

“I grew up with fashion week being held at Bryant Park and I remember at 18 sneaking into some of those shows because I wanted to be part of that incredible magic. I would love to get back to that; I just don’t know what that is,” said Smith, a native of Queens.

Many of the bigger Seventh Avenue stalwarts are not showing with the bulk of the collections on the CFDA and IMG calendars Feb. 14 to 18. While research from ListenFirst of European brands suggests showing outside of the fray of organized fashion weeks can attract more eyeballs, American brands also risk losing attention, particularly as those better-funded collections begin to roll out digitally in the coming weeks.

On the other hand, relaxing fashion week to, er, fashion months could also spread out content and create space for independent designers to rise and shine — and potentially break the habit of focusing on the same big names.

“There are so many of us in what you could call the middle class, who are holding up fashion and employing the community,” said Lim, who has 42 employees.

Acknowledging the unprecedented challenges for the industry, earlier this month the nonprofit CFDA renamed its schedule “American Collections Calendar” to address American designers showing later in the season and outside of New York. IMG has also lowered the barrier for entry, expanding its calendar to include designers showing in-season, and adding other types of programming, including virtual panel discussions and merch drops with consumers in mind.

Still, some bemoan the lingering divisions and perceived competition between the two corporate-sponsored fashion week organizing entities and believe they may not be serving the American industry as well as they could.

“I feel sad it’s so fractured right now,” Johnson said. “In other countries, the government cares about keeping fashion weeks and the industry speaking with unanimity. That’s been lost here and I hope it comes back…”

Others expressed disappointment that Tom Ford, as chairman of the CFDA, hasn’t been more visible as a cheerleader like his predecessor Diane von Furstenberg. “I wish Tom could help a bit more in his role,” said Siriano, a CFDA member. “Everyone is curious because he is a successful designer and has gone through highs and lows, but maybe that’s not of interest.”

According to the CFDA, it was Ford and Vogue’s Anna Wintour who spearheaded the calendar name change in line with the mission to globalize American fashion, and the designer has been present at all board meetings and some member meetings. The CFDA has raised and distributed $5 million for struggling designers through the grant program A Common Thread (Ford personally reviewed each application), and posts economic resources updated weekly, as well as hosting online seminars. Ford also led the organization’s response to the police killing of George Floyd, the recent Black Lives Matter movement and crafted the CFDA’s statement about transforming the industry to make it more inclusive and equitable. Programming to put that in place will be forthcoming. 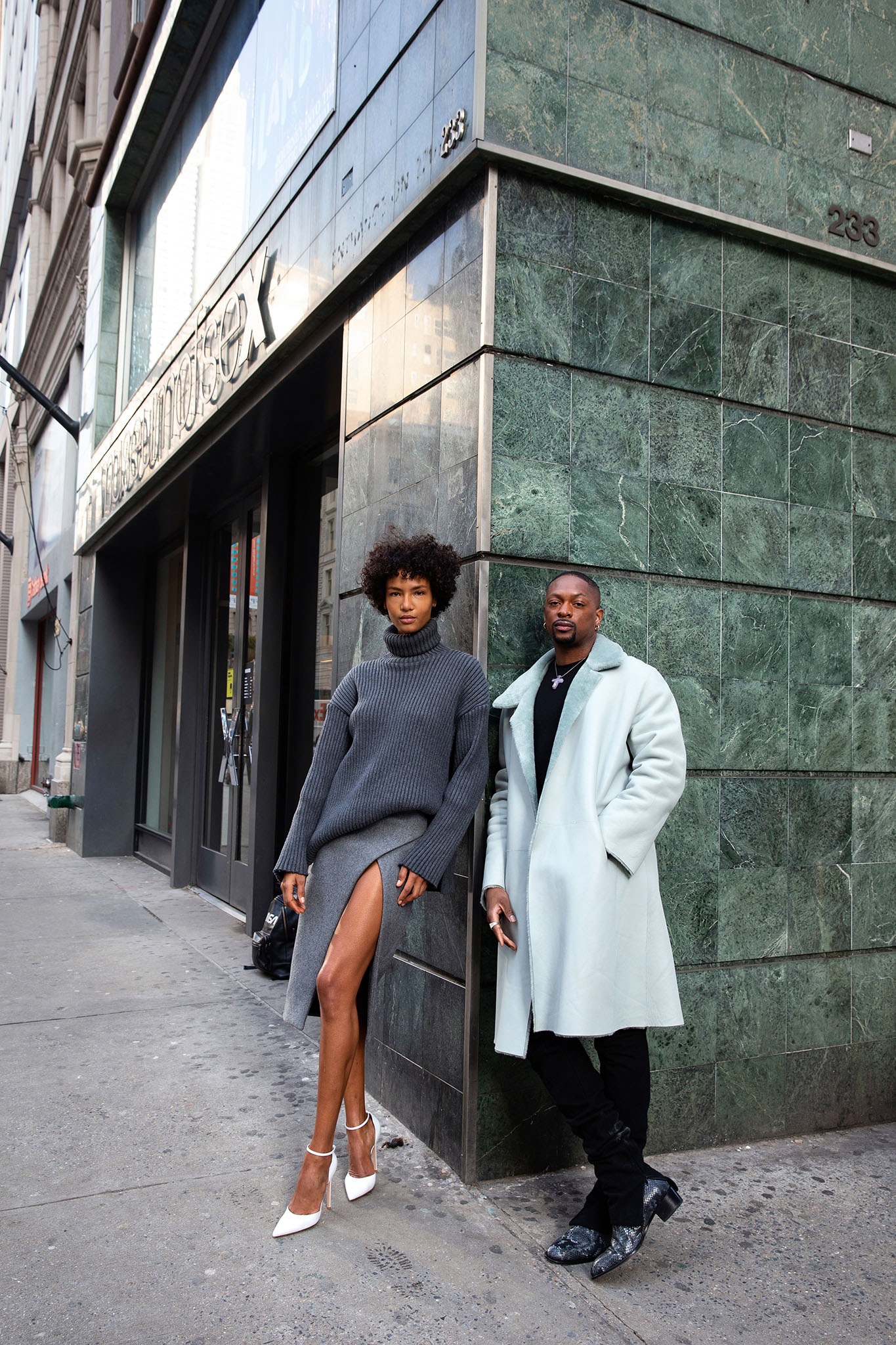 LaQuan Smith and a model in a look from his Fall 2021 collection, in front of The Museum of Sex, one of the designer’s favorite NYC spots. Lexie Moreland/WWD

“I would love to see, when it comes to the CFDA and accolades, that all these designers who have been on the sidelines get their moment in the sun,” said Gurung, also a member.

Designer Maria Cornejo, a CFDA board member, is proud of the response. “It’s hard to hold somebody’s hand and say everything is going to be OK because none of us knows that,” she said. “There is no knight on a white horse coming to save us, and the reality is the companies that have money behind them are in a much easier situation than companies that are independent like we are.”

The CFDA has Gabriela Hearst, Carolina Herrera and Ford on its roster. The CFDA’s Runway360 digital platform garnered more than 250,000 views last season, and has social channels that reach 1.56 million, while event producer and Hollywood modeling and fashion entity IMG’s NYFW.com digital platform and social channels reach 7 million. There are designers showing on both platforms.

“We believe it’s become an essential platform for fashion consumption and entertainment,” said Noah Kozlowski, IMG’s director of designer relations, who sees the future of fashion week being a mix of physical and digital events supported by parent company Endeavor’s network of production resources, models and stylists.

Though the dueling platforms and calendars, shifting dates and delays may be sowing chaos, designers are still finding joy in creating in New York, and when necessary, pivoting.

“I’m still doing TV, which pays the bills,” Siriano said of his long-running stint on “Project Runway.” He’s also launched interior design with its own dedicated team, and moved into a new studio in SoHo, after deciding against moving his business to Connecticut.

Designer and consummate entertainer Lela Rose has been doing a cocktail series on her Instagram called “Off the Wagon,” which she hopes to bring to life soon in her new penthouse showroom and terrace at 550 Seventh Avenue, where the American trifecta of Calvin, Donna and Ralph were headquartered in American fashion’s sportswear heyday.

“Ralph is still here,” said Rose, during a preview of her fall collection. “But we got the penthouse. I’m like, ‘Dang, rent is really falling!’”

“Rents will be a lot less, and the chance to have a little shop like I did, when I started making things in the back, is returning,” said Norma Kamali, who is celebrating 54 years in fashion in New York with the publication of her new book, “I Am Invincible.”

When she opened her first studio/store on East 53rd Street, her rent was $285 a month; today, she is proud to say she has no partners and no debt.

“What’s going to happen as a result of COVID-19 is there will be a lot of new companies and new designers,” she said, previewing her fall collection, heavy on swimwear (a surprisingly strong category during the pandemic) and sleeping bag coats for outdoor dining.

“You hand make and whipstitch a piece and nobody else has it — that’s the direction we’re going where it doesn’t matter about the calendar and the seasons and the bigness of your company. A couple people get together, one does clothes, one does interior design, one does social media and you have a new kind of company,” said Kamali, a pioneer in athleisure, e-commerce, high-low collaborations and wellness. “It always take disaster or disruption to create new opportunity, and in fashion, we’ve hit the end of a road.” 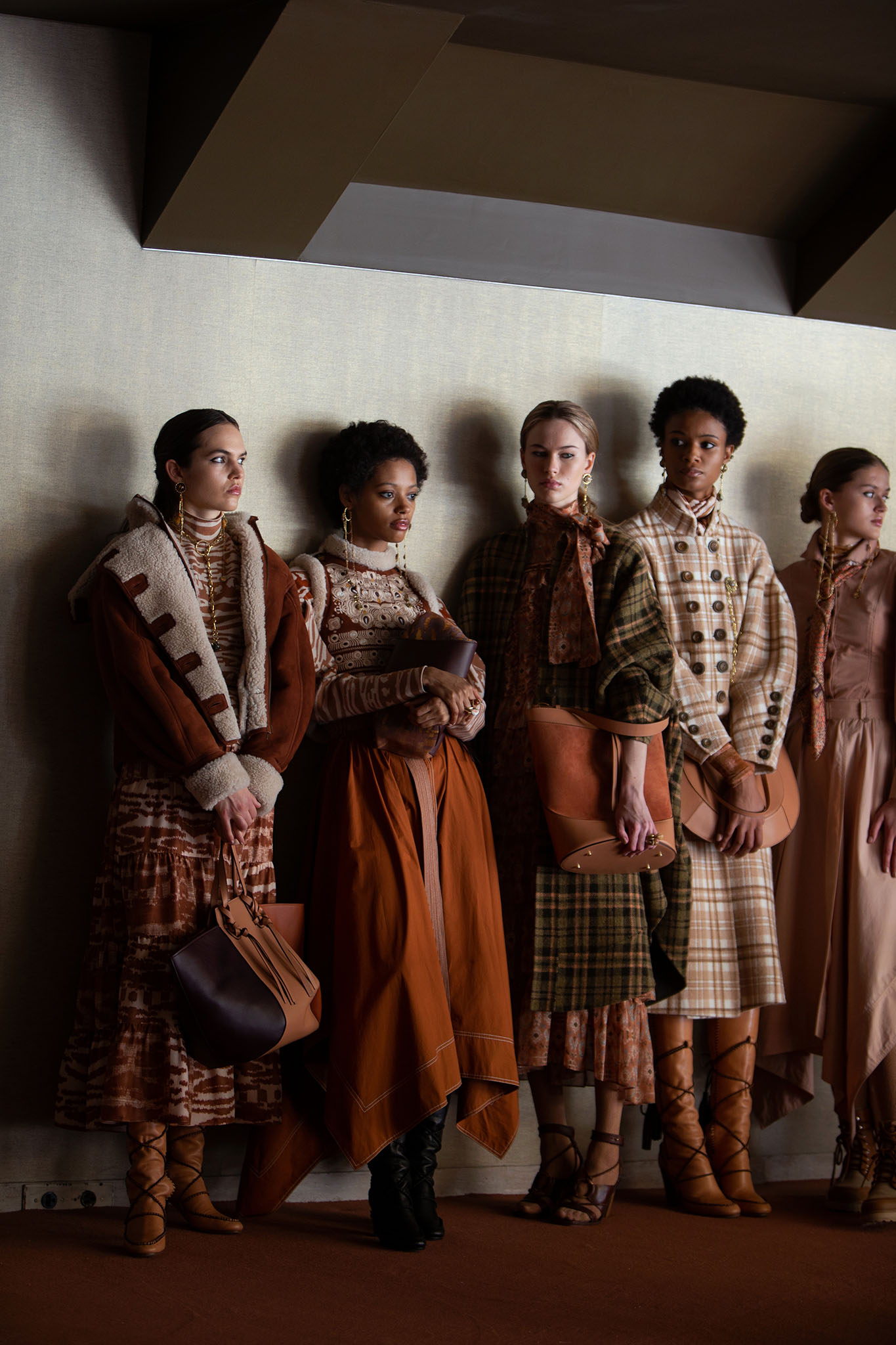