A HAIRDRESSER has revealed that one client was such a nightmare that she had to 'fire her.'

Bailey Mitchell, from South Carolina, US, said that she told the woman she was no longer welcome after she was rude to one of her other clients. 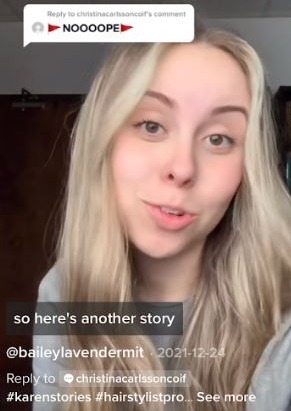 The hairdresser told how the client tried to sabotage her career after she asked her to leave the salon.

Posting under the domain @baileylavendermit she said: "Y'all asked for a series about why I fired clients in the past so here's another story."

Adding: "Early in my career I had taken on a new client who was a lot to handle, but during that time I didn't have a ton of clients, so I had plenty of time for her."

Bailey explained that the woman would turn up hours early, or hours late for her scheduled appointment, which became an issue when she began to grow her client base.

"Once my clientele started growing, that was no longer OK. She was also notorious for at the end of her service, writing a cheque and saying that I could not cash it for 2-3 weeks" said the hairdresser.

"The final straw was when she showed up three and a half hours after her scheduled appointment. I had a client in my chair so she needed to wait" added Bailey.

The hairdresser explained that she was working on another client when the woman came in and started to mock the client for being upset.

"After telling her she was no longer welcome and needed to leave, she of course blasted me on social media. Which is of course in an early hairstylist career, can be detrimental" added the hairdresser.

Bailey revealed that the woman still begs her to take her back as a client, even after being fired for her behaviour.

"So to this day, every once and a while I see that client that I fired out and about and she will still ask me if I will take her back on as a client," said the hairdresser.

Adding: "The answer is and will forever be, 'no'."

"It honestly baffles me how people act like this and see no issue with their behaviour" commented one person.

Another added: "they would have been fired at the check issue if it was me.. smh what's wrong with people."

"The check-cashing restrictions would’ve done it for me. That check is going straight to the bank the next day. Not my fault they write bad checks" commented a third. 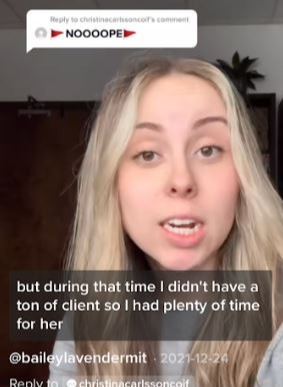 Speaking on hair, see how one bridezilla kicked her friend out of her wedding for cutting her hair -for medical reasons.

Also, I’m a hairdresser and mums are the rudest customers and ALWAYS ask for the same thing when I’ve cut their kids’ hair.