Australian supermodel Cat McNeil’s back is a crowded canvas with a bleeding dagger, a fly with bat wings, a scorpion, hangman’s noose and roses, dominated by the mantra “Never look back in anger.”

Some images are darker than ink, but McNeil, 33, says that like her engagement to former American NBA player Miles Plumlee, love of gardening and return to modelling after a three-year break, the tattoos bring joy. 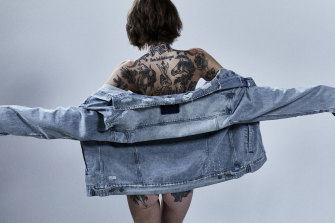 McNeil’s portable life story is on display in the latest campaign for Australian denim brand Ksubi, marking her latest comeback. “It’s a part of me that a lot of people are intrigued by, and I’m happy about that,” McNeil, 33, says. “I’m very proud of the work. Back when I started tattoos were taboo.”

That start was nearly 20 years ago in 2003, when a 13-year-old McNeil won the Girlfriend magazine model search, beating fellow contestant Ruby Rose, who she would go on to become briefly engaged to in 2010. Following an exclusive contract with controversial photographer Mario Testino and cover appearances on French Vogue and V magazine in 2007, McNeil was catapulted to supermodel status, becoming a catwalk regular at Chanel, Prada and Jean Paul Gaultier.

French Vogue named McNeil one of the top 30 models of the 00s, along with Gemma Ward and Gisele Bundchen. Like her peers, McNeil’s career has been marked by periods of flashbulb bright exposure, followed by seasons spent avoiding the lens. The Ksubi campaign marks the end of one of the model’s longest retreats from fame.

“It was good to be back and working with a team I knew,” McNeil says. “It was shot at my home and it’s very reflective of me. I remember saving up for a pair of Ksubi jeans when I was young, and it’s still my style.”

In the three years that McNeil has been away from the industry, modelling has changed, with greater size and gender diversity, as well as increased visibility of mature models such as Kristen McMenamy, 57, Shalom Harlow, 48 and Linda Evangelista, 57.

Despite her excitement at returning to modelling, McNeil reflects on her early career clocking up frequent catwalk miles in New York, London, Milan and Paris, in disbelief. Racing from show to show, with the occasional party thrown in is a world away from her life spent potting plants and riding and motorbikes. 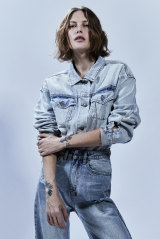 “I think we just did it on autopilot,” she says. “Occasionally, I do have to look back at the shows that I did and the designers I worked with and remind myself to be proud of what I accomplished.”

McNeil’s relaxed outlook comes from a welcome feeling of hope for the future. There’s the engagement ring Plumlee picked from Queensland jeweller Matthew Staff, renovations underway at her home and plans for a new property in Gympie.

“A lot of my outlook has to do with age and being in my thirties but owning my own house, being engaged and setting myself up for the future is important. It’s only been two months, so we haven’t planned a wedding. There are too many other things to do.”

That includes McNeil’s advocacy for LGBTQ causes. The model came out as bisexual early in her career, and promotes inclusivity on her social media pages. She has worked with Ksubi on a one-off piece to raise money for LGBTQ youth charity Minus18.

“It’s a charity improving the lives of the LGBTQ+ youth in Australia and is building change through social inclusion. They offer education for young people to be safe and empowered.”

Unlike fellow Australian models Alyssa Sutherland, Abbey Lee and Ward, McNeil has no plans to add acting to her resume.

“I enjoy the creativity that comes from being in front of the camera and working with the team on the day,” she says.

“Coming back to modelling is scary. Well, a little scary. You don’t know what’s ahead. You could go and flop, but I’m really excited to get back into it. I miss it.”

Make the most of your health, relationships, fitness and nutrition with our Live Well newsletter. Get it in your inbox every Monday.

Most Viewed in Lifestyle