When you’re weary, the idea of traveling to midtown Manhattan to ride a giant seesaw probably isn’t at the top your wish list.

It certainly wasn’t for Sonya Keshwani and Sahil Suleman Navodia one day in January of 2020, when a group of friends from their jamatkhana, a house of prayer, invited each of them to an installation of glowing seesaws that had been set up in the garment district. Mr. Navodia, then 27, had just returned from a trip to India; he was still jet-lagged. Ms. Keshwani, who had just turned 31, had recently completed treatment for breast cancer. She had been out and about all day, and she was tired. But she was also in a period of her life when she was determined to put herself out there; her fight against cancer had left her with a renewed sense of the value of friendships and relationships at large.

Although Mr. Navodia’s circumstances were less intentional, he too had reason to put extra effort into being social: He was a relative newcomer in the group. He wanted to demonstrate that he wasn’t flaky. So he shelved his fatigue, and headed to Manhattan.

When he got there, the group of friends were milling about in the middle of Broadway, between 37th and 38th Streets, where the seesaws had been installed. Ms. Keshwani, who Mr. Navodia had been in a room with before but had never really spoken to, was in line, and in need of a partner to ride a seesaw. Mr. Navodia offered to ride with her. Ms. Keshwani was receptive.

“What you have understand,” she said, “is that Sahil is about 6 feet tall, has broad shoulders and is very cute.” He was also wearing a sharp, beige peacoat, something Ms. Keshwani was quick to compliment.

“It’s hard to find a really nicely dressed young man these days,” she said. “If nothing else, I like to provide a little encouragement and validation.” 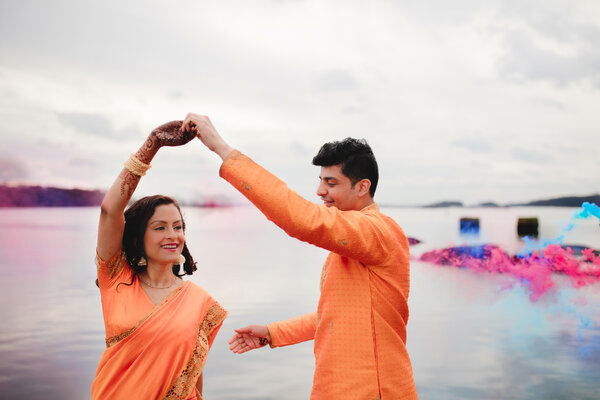 The coat compliment kindled a conversation between Ms. Keshwani and Mr. Navodia that extended through the rest of the evening. The group migrated to a food court in Koreatown. By the end of the night, Mr. Navodia had Ms. Keshwani’s number.

Their first outing together was in Harlem, where they went to a concert at the home of Marjorie Eliot, who has hosted jazz concerts in her Harlem apartment for decades. Ms. Keshwani and Mr. Navodia had also discussed plans to go out dancing together — Ms. Keshwani wanted to learn the fox trot; Mr. Navodia, who is a seasoned ballroom dancer, was eager to join. But the coronavirus pandemic came just a couple months into their budding relationship. So the couple had to cook up other ideas for dates, many of them taken in a car filled with sanitizer and gloves.

“You know how there’s the ‘Five Love Languages,’ that book about how to communicate your love?” Ms. Keshwani said. “I think sanitizing should be the sixth language.”

Ms. Keshwani and Mr. Navodia found a stability in each other that they grew to cherish. To Ms. Keshwani, the pandemic lockdown was reminiscent of the time she spent in chemotherapy, when she’d been largely isolated and susceptible to disease. Mr. Navodia had felt his own form of isolation years before, when he left India for graduate school in the United States, away from his family.

“We both knew that life can throw a lot of crazy, unplanned and sometimes unfair situations at you,” Ms. Keshwani said. “We wanted someone who, in the relationship, is consistent and stable and ever-present regardless of what happens outside of the relationship.”

Ms. Keshwani, a course associate at Columbia University’s School of Professional Studies and the founder of StyleEsteem Wardrobe, a fashion business that produces head wraps and donates one to cancer patients for each one sold, and Mr. Navodia, a chemical engineer in Connecticut for the semiconductor company ASML, were married on Jan. 1 at a rented mansion in New Rochelle, N.Y. Mohammed Hassan, a childhood friend of Ms. Keshwani’s and ordained through American Marriage Ministries, officiated before nine guests.

The couple moved in together that day. They haven’t been able to take the fox trot lesson they once planned. But they’ve made due.

“The first time we ended up dancing, the first informal lesson I received,” Ms. Keshwani said, “was in our apartment, together.”